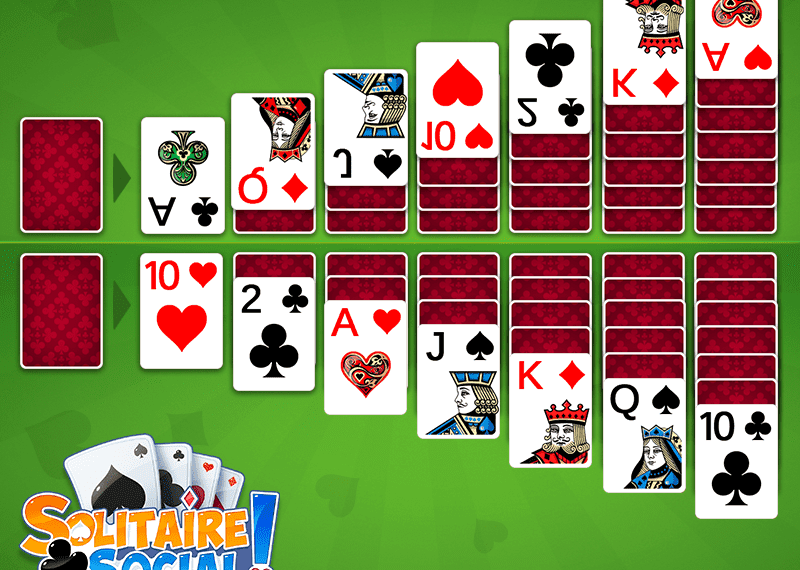 All about Double Solitaire

Solitaire games family includes more than classic Klondike Solitaire. So if you want to diversify your gaming experience, you can, for example, try Double Solitaire (also called Double Klondike Solitaire). This game is designed to be played with two players and encourages a competitive spirit. And the goal is to be the first one who runs out of cards. Keep reading the article to find out all about Double Solitaire Online.
Also, you can compete with other Solitaire lovers in another manner. For instance, you can open Solitaire Social and join regular or special tournaments. The whole tournament consists of three rounds, and to receive a reward, you need to win each of them. We also will describe the Solitaire Social game below.

Freeze your opponent to increase the winning chances!

Solitaire for 2 players is based entirely on classic Solitaire, therefore the basic rules of play are the same. To be more specific, you must move cards around the table, onto the foundations, and from your discard pile to the tablet/foundations.
The two-deck variant of Solitaire is thought to be easier to play because the player has more moves to send cards to the table and foundations.

In addition, there are two types of Double Klondike Solitaire that differ in mechanics, namely Turn-Based Play and Simultaneous Solitaire.

Turn-Based Play. The player with the lowest card on their one-pile begins the game. In the event of a tie, the player with the lowest card on their two-pile takes the first turn, and so on. During each turn, you can perform a sequence of movements, much as in Klondike. You can move cards around on your own layout, onto foundation piles as needed, and from your discard pile to your layout or foundations as needed. You may not in any manner play on or use your opponent’s layout or discard pile. You conclude your turn by turning over the top card of your face-down stack and placing it on your face-up discard pile when you can’t or don’t want to make any more moves. After then, your opponent takes the field. If you play online, the turn may go next automatically.
Simultaneous Solitaire is a game where you play two games at the same time. The game may be played with up to seven individuals, each having their own deck of 52 cards to begin with. The moves are identical to those in the previous edition, with the exception that the players do not alternate turns. Instead, everyone plays at the same time with only one hand, as swiftly as possible. The game will continue until one player has played all of their cards to the foundations and has won. Alternatively, until all players have been blocked. In this instance, the person with the most cards in their stack plus layout, or the player with the fewest cards in their stack plus layout, wins.
Except for Double Klondike Solitaire, there are other variations of Double Solitaire, including Spider Double Solitaire, Australian Double Solitaire, and Russian Bank.
Pay attention that a single Klondike played with two decks is named Gargantua solitaire, not Double Solitaire.
Also, based on the Double Solitaire rules, the game may be adapted for many players. Depending on your preferences, Double Solitaire may be played with one deck. In this case, one player will play, for example, with black cards and the other with red.

Tips on How to Play Double Solitaire

The main point of how to win two handed Solitaire is to be faster than your opposer.
To prevent your opponent from taking the foundation, hold off on Aces until you have the accompanying 2s.

Finding hidden cards in the draw pile is typically advantageous since it allows you to make more moves.
When shifting Kings to empty piles, be cautious, since making the wrong pick may restrict your options.
If you don’t have access to a King, attempt to keep your pile count down by avoiding emptying piles as often as possible.
Have no moves? You can wait for your opponent and maybe the situation changes.

We already know about Double Solitaire, and now it is time for a comparison. We have a unique gaming product, Solitaire Social, a game that not only entertains you and provides a possibility to compete with players worldwide but also offers extra features. For example, join special events, improve locations, receive daily presents, buy boosters, and use performances during a game.
By playing Solitaire Social, you also compete with other players, but you both have your own games and have no access to each others’ decks. In contrast to Double Solitaire with 2 players, you can disturb another player by playing Solitaire Social. For example, there is an option to freeze his or her cards for 30 seconds.
The Double Solitaire game implies checking your opponent’s progress, and Solitaire Social provides a similar option. You can see your opponent’s progress and the number of scores that he or she is collecting. If you see that another player begins to win, you can use spells to improve your game. For instance, you can activate a magic wand that whisks a blocked card off to the foundation or shuffle cards in the deck and your table. And so on.