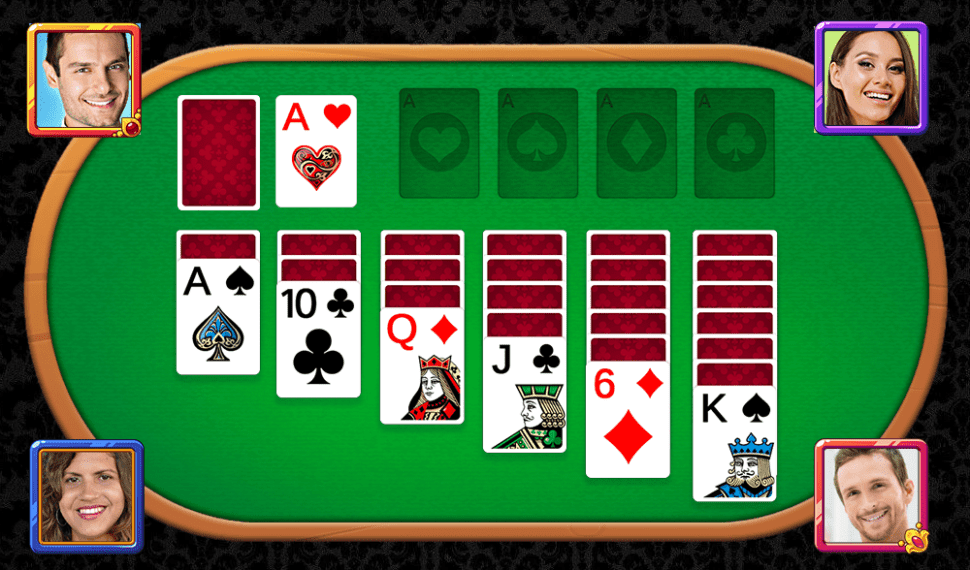 How to Set Up Multiplayer Solitaire

To play a group solitaire card game, each player needs to have a 52-card deck. Each deck must be different to everyone else’s so that everyone can identify their cards on the table.
To set up the game, each player must place five cards horizontally on the table in front of them. They then need to add one card face down to the four piles on the right. They then will have to add another face-down card to the three most-right stacks. Then another to the two most right stacks. Finally, they will place one face-down card on the right-most stack. Each stack moving left to right should have one more card than the previous stack. This layout is the same as a traditional game of Solitaire. Be sure to put the rest of the deck to the side as your draw pile. You will also need space in the middle of the table between players.

How to Play Multiplayer Solitaire

The game proceeds much like traditional Solitaire. Players will play through their deck and try to put together cards of the same suit in ascending order. Players will play the game until they have placed every card or are unable to make a legal move.
Each player will place their score piles in the middle of the table. The game will go on until the first person finishes their scoring piles or no one can make a legal move.
Players are then awarded one point per card in their scoring piles. This is their round score. You can play multiple rounds or set a score limit to play to. Each round is structured the same way and allows each player to increase their total score.

One variation for a more competitive multiplayer Solitaire game is to make each scoring pile usable by each player. In this variation, players will play the game as normal and start their scoring piles on the area of the table in front of them. As the game proceeds and scoring piles are started from each suit, the ability for every player to play on every pile begins.
For example, player one adds the ace of spades to their scoring pile. If player two has access to their two spades, they can play on player one’s ace to gain a point. This can allow for a more competitive and interesting variation that requires players to focus on the table and other players’ games while still completing their own.
The round ends when the first player clears their cards or until no one can make a legal move. When the round is over, count the points each person received from each pile. This is why each individual must have a distinct deck. Separate the cards and count points. Just like the other version of multiplayer Solitaire, this can be played for a set number of rounds or until a set score is reached.

Where to Play Multiplayer Solitaire Online

Are you ready to play Solitaire against others?