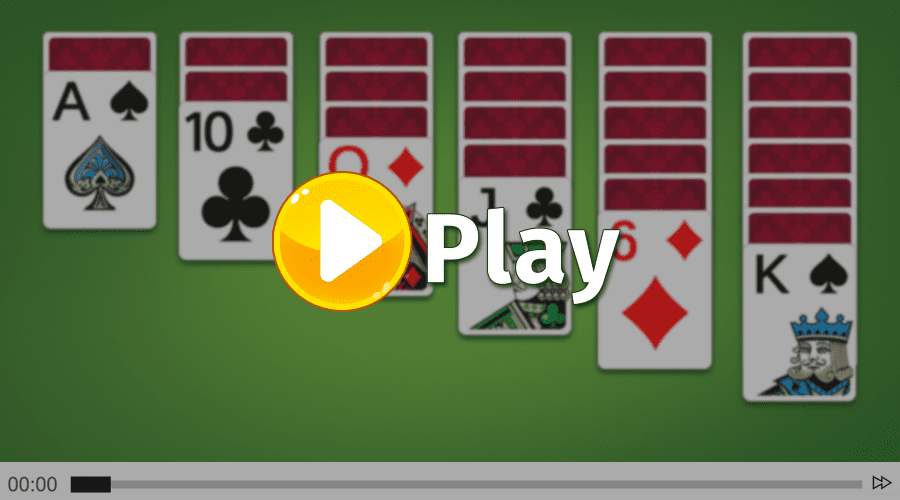 We’ ve compiled the most popular Solitaire videos for you on this page. They will help you quickly learn how to play solitaire with both offline and online cards.

Video 1 from Wiki How: How to Play Solitaire

If you’d love to learn the rules that guide Solitaire, here’s what you need to know. First, your aim is to successfully ensure all the (52) cards apportioned are well arranged into 4 foundational piles.
Each pile must contain all the cards in the same suit, starting from ace to king. In case you get stuck, try flipping the set of cards from the reserve again and again until you have placed all the cards in the piles. This version allows you to flip three at a time. Watch the video to learn more now!

Video 2: How to Play Solitaire

Does playing Solitaire online look a little confusing to you? This short clip shows you the steps required to build on each pile until you complete all four piles, from ace to king, in ascending order.
To begin, you need to turn one card face up for the 7 rows of cards the computer sets for you. With these cards, the arrangement starts. If you are stuck, this version offers a deck of reserve cards which you can flip one at a time until all cards are moved into their suits. The secret is one card at a time!

Video 3: How to Play Klondike Solitaire

Here is what you need to know about the card game Klondike Solitaire. Having shuffled your deck of cards, you place the first round of cards in seven rows, ensuring only the card in the first row is face up.
The second round of cards starts at the second row, face up, and the other rows face down. You keep going until you get to the seventh row, face up. The remaining cards are the reserve cards you will need when you are stuck. Your aim is to arrange all these cards in four piles according to their suits.

Video 4 from Triple Dot Studios: How to Play Solitaire

The rules of Solitaire are not as daunting as they may seem at first glance. Your aim is simple, to arrange all the cards allotted in the four foundational piles starting with the lowest, i.e., ace, to the highest, i.e., king.
To navigate your way correctly and win a game, you must learn to drag, draw and drop a card or set of cards accordingly. Note that you can only stack cards if the card(s) you’re dragging is a lower number and the opposite of the destination suit. Click on the video to learn more about earning points!

Solitaire’s goal is to systematically arrange the deck of cards into four foundational piles, each containing a suit. To start, shuffle the cards, and deal a round of cards in seven columns, with the card in the first column face up. Deal the second round of cards starting from the second column face up, and others face down until all the columns have a card face up.
Cards can be moved across the columns using opposite colours and lower numbers under higher numbers. Stack and move cards until each suit is complete in the four piles.

Video 6: How to Win at Solitaire

If you’re looking for tips and tricks to help you emerge as a winner of Solitaire, this clip is key. It offers basic strategies that can help you avoid being stuck. First, remember to flip the first card in the stockpile, as it may come in handy. Again, focus on moving the cards in the seven columns. But then, only move cards if you’ve got a reason. And don’t empty a column, except there’s a king to fill it up.
In placing king, decide whether red or black using the available Queens, Jacks and Tens. Above all, patience is essential to win the game. Watch now to learn more!

Please write which video was the most useful for you. Tell us what format of the video you like more: animation or when the rules are told by a person? Your opinion is very important to us!

Now you know how to play Solitaire, so go on and play!