How to play Spider Solitaire 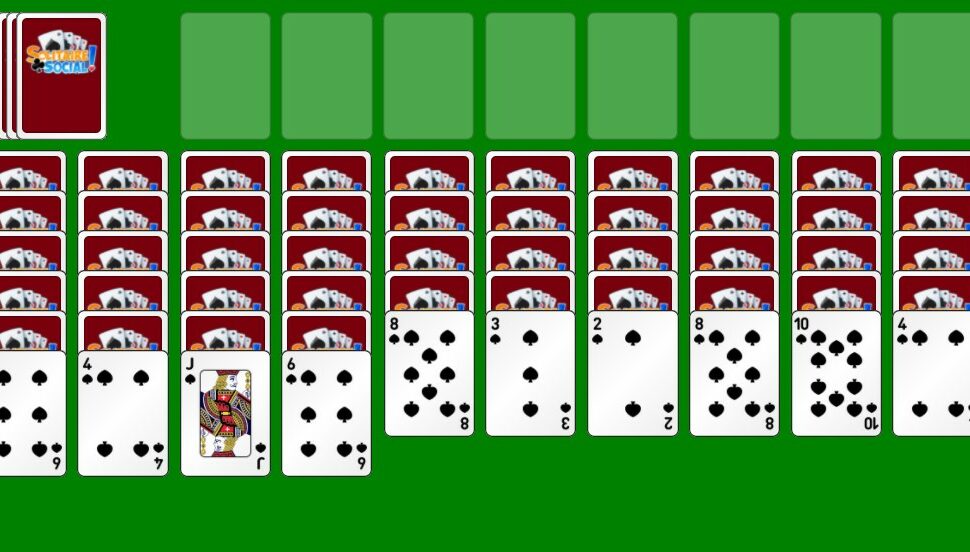 The game above was provided by the online solitaire website. Thanks to this you will be able not only to read about the rules of Spider Solitaire, but also to practice them. Play Spider Solitaire online, it will help you understand the rules faster.

If you now know enough about spider Solitaire, you may try something new

To play Spider Solitaire you’ll need some space, free time and at least two decks of cards instead of just one in Klondike Solitaire (don’t forget to remove the Jokers). The number of cards in these decks should be 52.
Top Tip: Play with different decks, so you don’t mix them.
Once that is done and you are ready to set up the game please lay ten cards in a row facing down. Repeat this step 3 times until you have four rows of 10 cards each(facing down). Then, add the 5th row of cards: first 4 should be facing down and the rest facing up(meaning they are facing you). Add 4 facing up cards to the last 6th row. The leftover cards are called the Talon, the remaining stack of cards that have yet to be dealt. Keep these close, as you’ll need them to play. 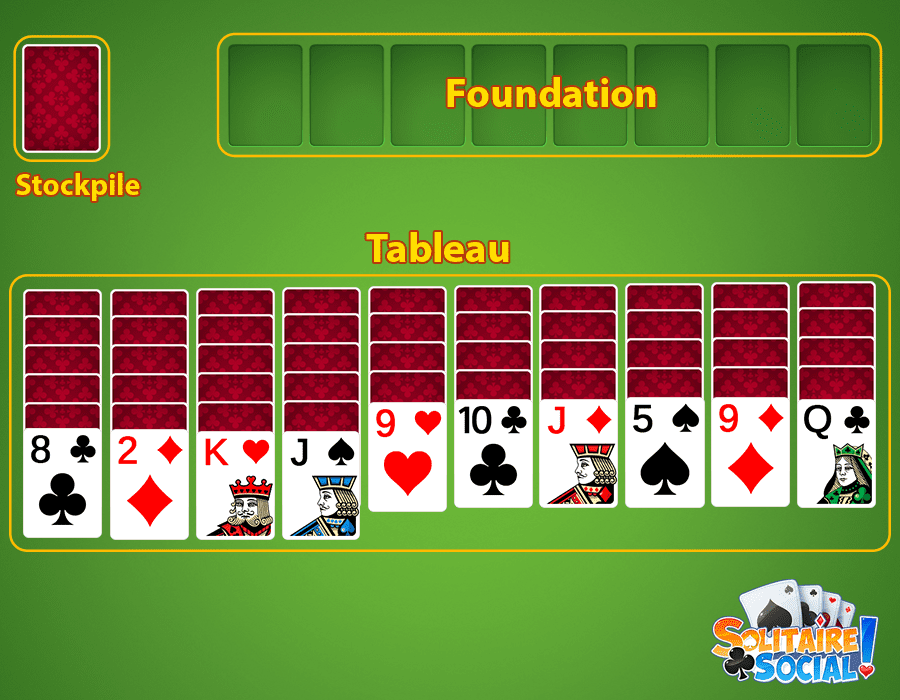 The game’s goal is to make eight sequences of cards within a column. These sequences should be in descending order, from King to ace. We can compare them with 8 legs of a spider. That’s why game was called Spider Solitaire!
To reach the game’s goal, you can only move a faced-up card onto another if the card is in descending order. For example, a 5 can only be placed on a 6. If you have a several cards in a row (i.e., 9,8, 7, and 6), and a card of the next highest level (10 for this example) becomes available, you can move the whole sequence of cards.
Notice that the online Spider Solitaire has several variants of the game:

You will need to get sequences of the same suit. Because of this, in games with multiple suits, you won’t be able to move mixed suits from one column to another – don’t forget that.
When there are no more moves to make, use the talon to create a new row of cards. It gets harder to make full columns when you add more cards. You cannot move a card if it is being blocked by another, regardless of which way it is facing.

Once a card has moved, the next facing down card the previous card was blocking will be faced up. The Kings are the foundation cards. It cannot be moved until the column is complete or if there is free space on the board (a column has been completed and left it alone). Once a column is complete, it is placed away from the others, and those cards can no longer be used.
There are multiple versions of Spider Solitaire that you can play both offline and online. Here is a detailed game plan for playing these different versions of Spider Solitaire.

The way we have previously described it is known as One Suit Spider Solitaire. This means that the suit or color of the cards doesn’t matter if the numbers are in the correct order (if you are playing off-line using real card decks). The layout and goals are the same as One Suit Spider Solitaire, with a few changes.
The colors of the cards matter in two-suit spider solitaire. For example, a six of hearts can be placed over a seven of diamonds as both suits are red. The online version of Spider Solitaire uses only 2 suits, so you do not get confused.
So, if a mixture of black and red cards is in a sequence, you cannot move it. However, you can make red-black sequences to clear space. On most computer versions, this is typically shown as spades and hearts.

Four Suit Spider Solitaire is the most complex version of Spider Solitaire with two decks of cards. In this version, both the color and suit matter. Therefore, you must make the whole set with the same suit to make a complete set.

How to Play Spiderette Solitaire

Spiderette Solitaire is only played with one deck. Rather than completing eight columns, the goal is to complete four columns from king to ace. This layout is based on the classic solitaire layout.
First, shuffle and lay out seven cards face down in a row. Flip the farthest left card to the face up. Then skip the first card to your left and lay down another row of face-down cards on the six remaining rows. Flip the card next to the card facing up to be face up towards you. Then skip the first two columns on your left and put another row of face-down cards onto the five remaining rows. Repeat this until the layout looks like this: 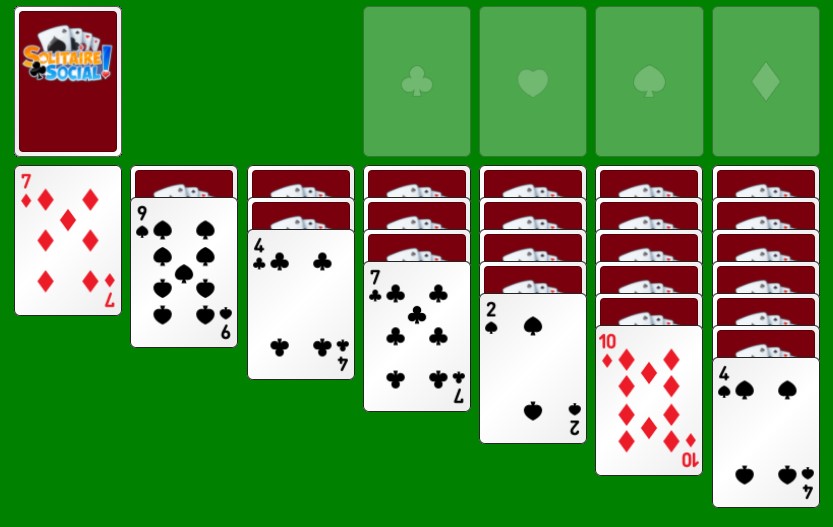 You can play one suit, two, or four suits of Spiderette Solitaire. The same rules for Spider Solitaire apply here. That’s how to play spider solitaire with one deck. What makes this game different from Klondike Solitaire is that the cards from Talon are placed on top of the cards in the rows and come into play immediately. In Klondike Solitaire, as in Solitaire Social, you can choose which cards to use and which to save for later.

Solitaire Social uses the Klondike Solitaire layout in with some unique spells you will not find in another online game. You can invite your friends or compete strangers worldwide with special power-ups and more! You are introduced to special game options when you sign up (no download or payment required). Some power-ups are self-explanatory, such as hint and undo. However, there are unique ones at play too.
The one you are introduced to is Magic, the strongest spell in the game. When the game is critical, the Magic power-up can save you time by unlocking cards faster and making quick moves. Magic can also be used as in-game currency to buy other spells.
The Freezer allows you to freeze all your opponent’s moves for 20 seconds, зerfect for speed play. Use the free magnet tool to move your cards to the foundation automatically. But be careful, sometimes it can lead to a deadlock situation. The main draw is the multiplayer Solitaire Tournaments. Eight people compete in a series of matches to be the best of the best! These trophies and spells also lend themselves to upgrade your additional locations. That’s right; you can decorate your garden, which can be improved with the winnings from the tournaments. The garden is unlocked after five tournaments. There is also the Knockout Tournament, where you go through 3 continuous rounds against 3 other players until there is only one winner. There are also daily quests for more advantages within the Solitaire Social game. The prizes are spells, shields and coins. In addition to the differences in card layout, Solitaire Social has many additional advantages over Spider Solitaire.
Spider Solitaire is a fun game for those who like a challenge. Be patient, think ahead, and practice is how you’ll win this game. Try it out! And if you’re tired of the classic Spider, check out the wonderful world of Solitaire Social!