How did Solitaire arrive on the computer

For decades Solitaire has been played by millions on computers worldwide. Today there is a whole generation of Solitaire fans whose first exposure to the game was free Solitaire on the computer. Yet, Solitaire predates the first appearance of computer Solitaire by almost 200 years. So, when did Solitaire first appear in a digital format? And how did technology revolutionize this centuries-old game?

When we discuss the history of Solitaire, we are talking about the history of Klondike Solitaire. Solitaire was first known as Patience. And it initially appears in historical records in a German book published in 1788. Then, as the game grew in popularity, references appeared in Swedish, Russian, and French writing from the 1800s forward. Finally, the first card solitaire book appeared in the United States in 1870 under the title Patience: A Series of Thirty Games with Cards by Ednah Cheney.
Klondike Solitaire arrived in the 1913 edition of Official Rules of Card Games. At the time, it was titled Seven-Card Klondike. This was to distinguish it from another game in the same book titled Klondike. Today we know the latter Klondike as Canfield Solitaire. Eventually, Seven-Card Klondike was shortened to Klondike. Meanwhile, Klondike’s popularity continued to grow. And it soon became the most popular version of Solitaire in the world. 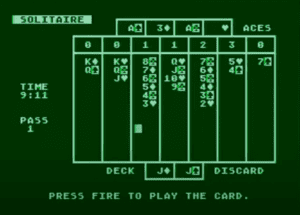 Atari was the first computer platform to release a digital version of Solitaire. Their 8-bit version of 1-Card Klondike first appeared in the Atari Program Exchange catalog. The Program Exchange was a collection of user-written programs compatible with Atari home computers. In the 1981 winter edition, Atari featured a digital version of Klondike submitted by Atari-user Mark Reid.
The gameplay would be considered clunky by modern standards. But, at the time, it was revolutionary. The 8-bit graphics featured a simple green matrix screen with each card represented by a number or letter next to the suit. Users used the Atari joystick to navigate the blinking cursor across the screen. They would then select the cards with the fire button before moving the card to a new stack.
The game featured none of the automation or graphics players are accustomed to today. Even the action of moving a card from the draw pile to the discard was a manual one. Still, for the first time in history, players could play Solitaire on the computer. 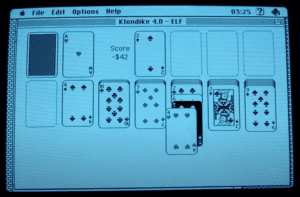 1984 saw the arrival of a Solitaire computer game for the Macintosh personal computer. This was 3-Card Klondike and was the first digital version to include the sort of graphics and automation that would become standard in later computer Solitaire games.
This was also the first commercially available version to boast graphic representations of the cards. In addition, it featured basic levels of automation. This included the ability to click on the draw pile to draw the next 3 cards and the automatic return of cards to their stack when an illegal move occurred.
This version also assisted players by highlighting legal moves for a selected card and activating a “Cheat” button when no more moves were available. However, the most significant leap forward in the user experience was the ability to drag cards between stacks using the arrow cursor and trackball.

Now you can play solitaire much more comfortably on the computer. Try it yourself! 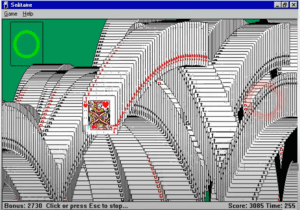 The release of Windows 3.0 included the first version of Microsoft Solitaire. This digital iteration of Klondike was developed by Wes Cherry with the deck designed by Susan Kare and was released in 1990.
Initially, Microsoft Solitaire was considered an educational aid. The Windows user interface was still novel for many PC users. And Solitaire allowed them to get comfortable using the innovative mouse, including new features like drag-and-drop. Microsoft Solitaire quickly became the third most used program on Windows, even over professional programs like Word and Excel.
It was also the first to feature victory graphics, such as the bouncing cards, which are now a staple of many digital versions of Solitaire. In addition, Microsoft allowed players to choose between 1-Card and 3-Card Klondike and select different scoring conventions. User-friendly features such as these laid the foundation for Microsoft Solitaire’s induction into the World Video Game Hall of Fame in 2019 as recognition for its contribution to Solitaire computer games worldwide.

Nintendo released Clubhouse Games on the Nintendo DS in Japan in 2005 and Europe and North America in 2006. It featured 42 classic games, including various board and card games. Klondike Solitaire was among them.
The game was such a hit that Nintendo released an updated version for the Nintendo Switch in 2020. This version included 9 additional classic games, including Spider Solitaire. This addition effectively added the Nintendo family of game systems to the growing list of consoles that now have Solitaire.

As technology evolves, so too do consumer preferences. Gaming technology has taken giant leaps forward in the past decade, removing the need for players to invest in purpose-built consoles to enjoy a high-quality gaming experience. One might think that online Solitaire would struggle to maintain its appeal in the age of increasingly complicated games. However, that is not the case. 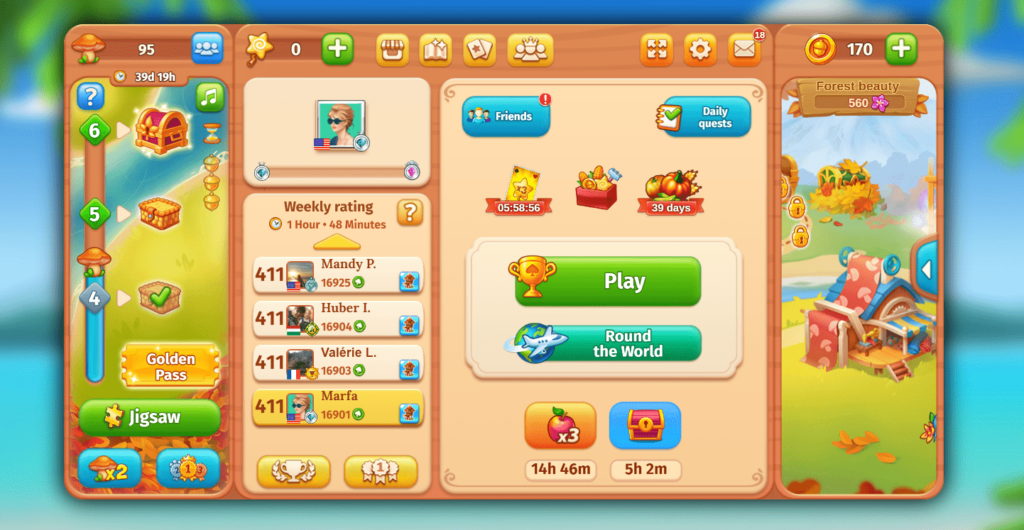 Enter Solitaire Social. Solitaire Social is the latest stage in the proud lineage of computer Solitaire. But it is so much more than a basic game of Klondike. Instead, Solitaire Social provides a new twist on the classic 1-Card Klondike by adding a competitive element and a whole stack of unique features.
Solitaire Social allows players to play Solitaire on the computer against others from across the globe in tiered tournaments. Winning competitions supply special rewards for players to collect. These rewards provide in-game power-ups as well as unlock dozens of unique decks.
Power-ups in Solitaire Social come in the form of magic and spells. Each provides a special advantage during gameplay. They can reveal blocked cards, reshuffle the draw deck, freeze your opponents, or open moves when nothing else is available. Magic makes every game winnable and adds an exciting twist to friendly tournaments.
Solitaire Social is easy to learn and even easier to love. Play free Solitaire on the computer here.

Do you want to play? Then enter the game and enjoy it!