The History of Solitaire 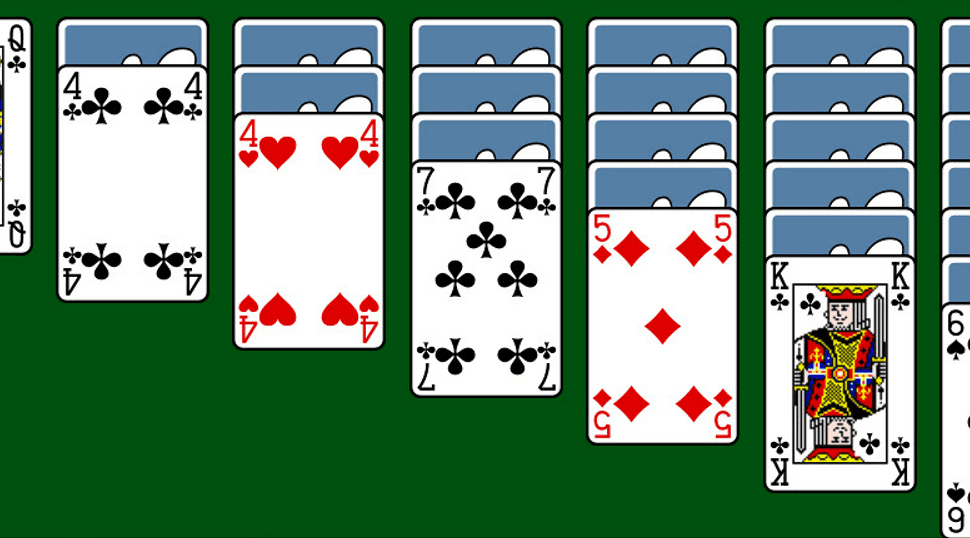 For generations, countless individuals have played Solitaire, and many times at that, mastering the art of flipping and arranging decks of cards in sequential order. But many are probably not aware of Solitaire’s long history. Read on to become familiarized with the historical context of this beloved game.

The game Solitaire was first mentioned in 1746. But experts posit that this was a reference to Peg Solitaire. Towards the end of the 18th century, cartomancy (a term used to describe divination by cards) became popular. Likewise, tarot card reading was the order of the day. It was at this point that Solitaire found its way into the hearts of many. The game was christened “Cabale” in Scandinavian countries. The word “cabale” is closely linked to “cabal,” which implies a mystical interpretation of the Old Testament.

Around the same time as Solitaire, a game called “Patience” was growing in popularity in the United Kingdom. Research has shown that the first mention of the game was in an English letter written by Countess Granville in 1822.

Believe it or not, there’s more to the history of Solitaire, in which the industrial revolution played a major role. Before this major disruption, many people had taken to farming, and they would fraternize with each other regularly. However, with the advent of industries and white-collar jobs, people experienced more time alone than before.
When one does the same thing repeatedly, there is a greater chance of becoming bored, and people soon got tired of playing the same cards every day. They needed variety. As a result of this demand, new variations of Solitaire sprung up, including the clock, the spider, the Empress of India, and the Queen of Italy.
The rules of Solitaire of course also deserve mention in a survey of the game’s history. The first rules were written by Lady Adelaide Cadogan, a skilled writer for Prince Leopard and the Duke of Albany. The latter happened to be the son of Queen Victoria. Cadogan’s book led to a surge in more books on card Solitaire, and this influence continues even today. The game’s long history is a true testament to its endurance.
From the 20th century onward, informative content on the game has appeared in novels and movies. Solitaire has remained popular, but when was it invented?

When Was Solitaire Invented or How old is Solitaire?

Solitaire has no definitive date of invention, but its record can be traced to the 1700s across Northern Europe and Scandinavia. “Patiencespiel” first appeared in a German book, Das Neue Königliche L’Hombre Spiel, which was published in 1788. Additionally, there are strong indications that Solitaire enjoys a French influence. But nobody knows when was the card game solitaire invented…

Who Invented the Card Game Solitaire

For years, efforts to successfully trace the game Solitaire to a definite origin have proved unsuccessful. The game started a very long time ago, which is one reason why it is difficult to pinpoint who invented the solitaire card game. Despite the challenge of discovering Solitaire’s origins, many theories have been put forward.
According to one theory, Solitaire is the brainchild of a French aristocrat who was condemned to prison in the 17th century. Going deeper, historians have noted that this period witnessed the rule of the notorious King Louis XIV, who had a penchant for imprisoning nobles, especially those who were not his relations. However, several scholars have punctured holes in this story, describing it as inconsistent. On the other hand, many others give credence to this history, believing that a French Aristocrat did indeed invent the card game Solitaire.
Another theory posits that Pelisson, a French mathematician, invented Solitaire game to entertain the Sun King, the nickname of Louis XIV. In 1697, Anne de Rohan-Chabot and Princess Soubise were portrayed as playing cards. 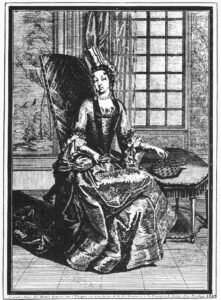 This French engraving may very well be the first documentation of the game. However, there’s a wide consensus that this engraving was only a forerunner of the Solitaire card game. The oldest version of the game has been identified as Peg Solitaire or Solo Noble.
Essentially, the identity of the person who invented Solitaire varies by theory. Nevertheless, plenty of information about the game is still known. First, Solitaire is a game of antiquity, a classical game from times past. Its endurance is likely due to the nature of how and why it is played: Not only is no occasion required, but also anyone can play it anywhere.
Since its inception so long ago, players have battled the game of Solitaire to their utmost satisfaction. However, the odds of winning the game were only discovered in 2019. So, how exactly was this problem solved? Mathematicians only needed to collaborate with programming experts to bring their expertise to bear. In the end, these professionals came up with a computer program to solve the complex calculations.

When Was Computer Solitaire Invented

One of the first games to have come into prominence simultaneously with the PC was Solitaire. The reason for this is simple. At the time, personal computers had just been developed, and there were no major technological upgrades. Solitaire was a perfect fit for those that could afford PCs when they were first sold. It is probably wise to know how long has Solitaire been around at this point. 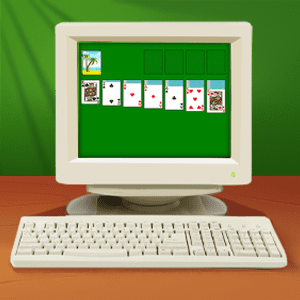 Initially, Solitaire the computer game was mainly text-mode running on single-game software. With innovations in the tech industry, developers had no choice but to eventually improve the game’s graphics. They also began to combine multiple Solitaire games into what would later be known as the Solitaire collection. Unlike before, the collection had mouse support, which significantly improved simple text input. It was also commercially available in 1987 for both Microsoft and Macintosh.
Furthermore, Solitaire’s Journey, a video game, was put out in 1992 by Quantum Quality Productions. Solitaire’s Journey offered 105 Solitaire games to choose from, and players had the freedom to build custom journeys through a subset of the games. One of the more appealing features allowed players to participate in “quests” and locate “treasure,” but they first had to finish a set of solitaire games successfully.

In 1990, Solitaire made its debut appearance with Microsoft Windows 3.0. All players needed to do was drag-and-drop the cards. After that, Windows 95 became prominent, and everyone went into a frenzy. The version known as “FreeCell” became a sensation almost immediately with several shareware versions. This wide acceptance would later inspire Microsoft XP to upgrade to Spider Solitaire. Likewise, Solitaire Plus! and Solitaire Till Dawn were developed for Macintosh. Although the inventor of Solitaire remains debatable, the inventor of Solitaire for the computer is known: Intern Wes Cherry made it all happen in 1990.

Thanks to technological advancements, Solitaire is now compatible with most operating systems, including Linux, Pocket PC, and Palm OS. The game can now be played on smartphones as well. Players can immerse themselves or engage their friends in a game of Solitaire at anytime, anywhere. We strongly recommend you to try our Solitaire Social game to play online in any browser.

Who Invented the Game Speed Solitaire

Speed Solitaire was created by Reinhard Staupe but was first published by Adlung-Spiele in 1995. Although the game is originally for two players, it is possible to play with up to six variants.
Per the rules of the game, once a player has run out of cards, they are expected to slam or knock on the table and shout “Speed!” A player can also slap both cards.

Why Is Solitaire Called Solitaire?

In England, Germany, and Poland, Solitaire used to be called “Patience,” but it was known as “Cabale” in Scandinavian countries.
The root word of Solitaire is “sol,” meaning “alone,” a perfect description of the game. Solitaire was not a game for two competitors until recently. It used to be (and often still is) played alone. Even though Solitaire has gone by many names, each version reflects the basic principles and strategy of the game: time and patience. In the end, a player derives much joy, pleasure, fulfillment, and satisfaction if they win the game of Solitaire.

Is Solitaire Good for the Mind?

Perhaps unsurprisingly, playing Solitaire comes with many benefits. This is lucky since the game also happens to be so engaging as well as time-consuming. Like many other card games, Solitaire is a game of the mind, encouraging a high level of thought. To see how effective Solitaire can be on the mind, one need only look to Napoleon.

Condemned to isolation, Napoleon could have very well lost his mind. 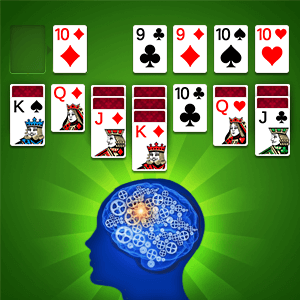 However, that is the exact opposite of what happened. When he was banished to St. Helena, Napoleon had no choice but to take solace in solitude. And one way he was able to maintain his mental acuity, according to the story, was by playing Solitaire. This is just one example of how powerful Solitaire can be. It is also worth noting that the game was adopted to improve the well-being of patients in mental asylums.

According to research conducted in the United States, the average American scrolls through social media for about 5 hours a day, resulting in a reduction in cognitive capacity. Unlike social media, Solitaire can improve mental agility. For instance, if one were to develop their physical muscles, they would exercise at the gym several times a week. If Solitaire is a kind of mental “gym,” the metaphor applies. The player has to put in 100% concentration, strategize, and stretch their mind to its fullest capacity. Over time, one’s problem-solving and quick-thinking abilities will most definitely improve if they are discipline enough.

What does the history of Solitaire card game tell us?

The history of Klondike Solitaire is one rich in innovation and fun facts. Its inventor is not known for certain, but the many theories are fascinating and might interest and impress any Solitaire afficionado.