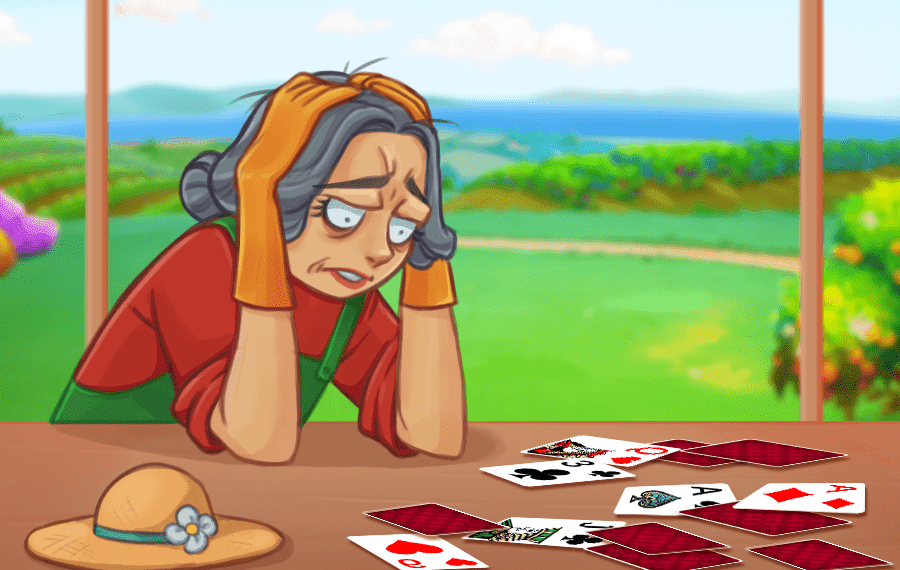 Try to defeat all opponents in this version of Solitaire

Challenge keeps online solitaire fun. So when you’ve mastered the basics, it’s time to dial up the difficulty. Try conquering these online variants for some of the most difficult solitaire games on the web.

Scorpion Solitaire is one of the most difficult solitaire varieties, with only 5-15% of games being winnable. The gameplay is pretty simple, though. This makes it a terrific game for those looking for a new challenge.
To set up, deal 7 stacks of cards to form the “Scorpion Body.” In the first 4 stacks, the first 4 cards are dealt face down, and the last 3 are dealt face up. In the last 3 stacks, all the cards are dealt face up. The remaining 3 cards form a “Scorpion Tail,” which can be used when there are no available moves.
Play is straightforward. The goal is to create 4 suit piles (the “Scorpion Head”). These piles descend from king to ace of matching suits. To play, you move stacks of face-up cards around the Scorpion Body. You can drag any face-up card (along with any cards on top of it) to an available card of the same suit and one value higher.
For example, you could move the 10 of diamonds to the jack of diamonds. But you could not move it to the jack of spades or the 9 of diamonds.

Canfield Solitaire is surprisingly challenging. It looks simple enough with only 4 stacks and a single reserve pile. Yet, with so few options to play cards, players must make the most of each play if they have any hope of winning. And that’s the beauty of Canfield Solitaire. It’s easy to learn but delightfully difficult to master.
If you think you’re up to the challenge, then your best first step is to read up on the game. Learn the rules and recommended strategies to make the most of your early games. To start, check out our overview of Canfield Solitaire.

If you are new to Solitaire Social, you might find it a surprising addition to a list of the most difficult solitaire varieties. However, Solitaire Social grows with you as you develop as a player. That adaptability means it becomes progressively more difficult as you level up. For instance, the difficulty is significantly increased at diamond and star levels compared to the initial levels.
Additionally, Solitaire Social features multiple competition formats. Each presents a unique challenge you can’t find in any other solitaire game. And winning any of these tournaments without using magic is a feat.
In the end, Solitaire Social is as difficult as you want it to be. It continues to challenge you as you grow as a player. This ensures the game says fun and fresh no matter how many times you play.

Are you ready to try? This Solitaire game doesn’t give anyone a free pass

You can learn how to play Forty Thieves in 2 minutes, but it takes far longer to master. This difficult solitaire game is all about making the most of every card. To play, you shuffle together 2 playing card decks. Then you deal 10 stacks of 4 face-up cards each. Finally, the remainder of the cards are placed face-down in the draw pile.
The goal is to complete eight suit piles, each starting with an ace. You can play a single card between the 10 stacks by dragging it to a card of the same suit and 1 card-value higher. For example, a 5 of clubs could be played to an open 6 of clubs but not a six of any other suit. Any card can fill empty spaces.
You can flip a single card from the draw pile when desirable moves are unavailable among the stacks. Be careful, though. You only get one pass-through.
These simple rules dramatically limit the number of available plays at any given time and make it easy to block necessary cards accidentally. This makes Forty Thieves an infamously tricky game.

There are a million online solitaire platforms out there. But among the most popular is Google’s Klondike Solitaire. It’s about as basic as online solitaire can be, making it ideal for purists who crave traditional Klondike without the bells and whistles of other versions.
Google solitaire comes in two modes: easy and hard. Easy solitaire is 1-card Klondike. And hard solitaire is just 3-card Klondike. And for most, that is plenty difficult. However, if you want 3-card Klondike with more features and fun, check out our version. It’s the 3-card turn you know but with all the magic of Solitaire Social.

How To Beat Solitaire in Hard Mode

The simplicity of solitaire can make it deceptively difficult, especially if you are playing one of the hard versions of solitaire. Many believe that winning is just luck. But a lot of strategy goes into conquering a hard hand of solitaire.
If you are a new player, your best first step is to get familiar with the rules of the solitaire variety you are playing. To learn more about the fine art of solitaire strategy, check out our solitaire strategy guide Basic Tips, Hints, Strategies for Solitaire. This guide gives you all the fundamental techniques you need to conquer even the trickiest games.
Once you’ve read it, try some of the hard solitaire versions listed above. And then let us know what version you found the most difficult in the comments below!

Be faster in Solitaire game and defeat all the opponents!