There’s a reason this game gets into movies all the time – it’s amazing!

So, do you really like to play Solitaire when you have some free time? Do you think this card game was actively shown in modern movies and popular culture in general? You may be genuinely surprised, but there are many well-known heroes, who are fascinated by cards! Today, we have prepared for you a very curious and interesting selection of movies with main and additional characters related to the world of cards and Solitaire.

This is a classic Hollywood thriller about the struggle of spies during the time of the Cold War. A veteran called Raymond Shaw is one of the main characters of the movie. He was played by Laurence Harvey, and he turns out to be a “sleeper agent.” According to the plot of the movie, he was secretly programmed to be a spy when he was in captivity. And the queen of diamonds is the main trigger that activates a secret program hidden in the depths of his mind. During one of the phone calls, the Communists offer Raymond Shaw to play Solitaire. As soon as the queen of diamonds appears from the deck, the secret program of the agent is immediately activated.

In the eighth chapter of the Bondiana, famous Agent 007 is interested only in the fortune teller called Solitaire played by charming Jane Seymour. Interestingly, this movie was the debut of Roger Moore in the role of James Bond. In the “Live and Let Die” movie, Agent 007 has to fight with a drug lord called Dr. Kananga. In order to succeed, he meets his medium Simone Latrelle. This lady mastered the Tarot cards and decided to call herself Solitaire. Interestingly, the young lady takes Bond’s side and almost dies. Even though the movie has too much action to show all facets of the calm world of Solitaire, the cards in the “Live and let Die” movie appear more than once.

The LEGO Movie (directed by Phil Lord and Christopher Mille, 2014)

We decided to add this movie that was nominated for the Golden Globe Award as the Best Animated Movie to our today’s selection. Why? Now, try to pay attention to the moment when the main character (who was voiced by Chris Pratt) is interrogated by a character called the Bad Cop. There are two robots watching them, but one of them is busy with something completely different. You can see the famous Solitaire from Windows right on his laptop!
It turns out that Lego figures can also be passionate about Solitaire! Interestingly, this is not the only Easter egg hidden in this lovely comedy cartoon. Try to pay attention to the details, and you will be amazed to discover dozens of secret and funny things!

Well, now I want to lay out the cards for Solitaire…

Let us take a moment to talk about comic book movies. In the “X-Men Origins: Wolverine” the main character is played by the unforgettable Hugh Jackman. Suddenly, he encounters another mutant who calls himself Gambit. The real name of Gambit is Remy LeBeau. Interestingly, he is not only one of the biggest fans of playing cards but also masters to find quite unusual ways to use them. This amazing character was played by Taylor Kitsch, who was just starting his career at that time. Gambit has an interesting feature: he is able to control all the potential energy of each object. Potential energy becomes kinetic, while the object turns into a weapon. Even a pack of cards becomes a weapon in the hands of the Gambit.
Here is an interesting fact: Playing Gambit was the dream of the popular actor Channing Tatum. He was virtually having this role, but something went wrong and the new project was canceled.

Interestingly, “Jaws” was one of the very first blockbusters in the history of cinema. In addition, it was one of the first films directed by the famous Steven Spielberg. This legendary movie tells a story about a resort town located in New England that was attacked by a giant man-eating shark. Sheriff Martin Brody, fisherman Robert Shaw, and oceanographer Richard Dreyfuss decide to go hunting for such a bloodthirsty fish right in the open ocean. The character of Richard Dreyfuss had a remarkably interesting feature that was added to the movie to demonstrate the indomitable character of the scientist. Right at the moment, when the flimsy vessel of the main heroes is trying to catch a big shark, Richard Dreyfuss is sitting on the deck and playing Solitaire. By taking a closer look, we can easily recognize the Klondike Solitaire!

We have spent a lot of time talking about Solitaire in movies, but we forgot that the cards themselves can be heroes or even their antagonists. We are talking about probably the most famous children’s book called “Alice in Wonderland.” Its author Lewis Carroll decided to ensoul a deck of cards, while the Red Queen, or the Queen of Hearts, became one of the most important characters of the fairy tale.
Right now, we are going to talk about one of the adaptations of this great book directed by the wonderful Tim Burton. Interestingly, he invited his wife Helena Bonham Carter to play the Red Queen. In addition, this actress appears in almost all of Burton’s films, despite the fact that they broke up in 2014.
Helena Bonham Carter did a great job and even reappeared in the sequel of “Alice in Wonderland”. We highly recommend watching both movies!

In our today’s selection, we decided to talk about profoundly different films: from Hollywood classics to modern postmodern movies, cartoons, and even revolutionary blockbusters. Have you seen all these movies? Maybe you even know more than us and can offer more movies about cards and Solitaire games? We look forward to your suggestions in the comments below.
For now, until next time! Do not forget that Solitaire and movies can create amazing fusion!

Well? Do you want to try it now? Solitaire is awesome! Hollywood won’t lie 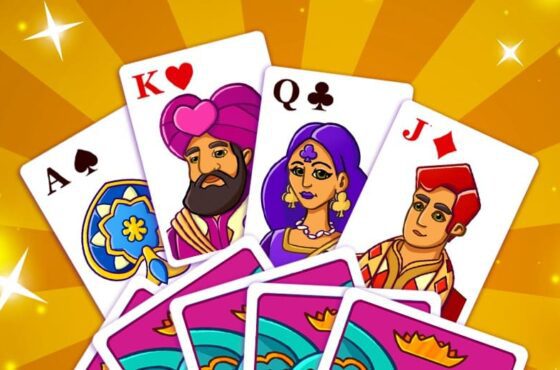