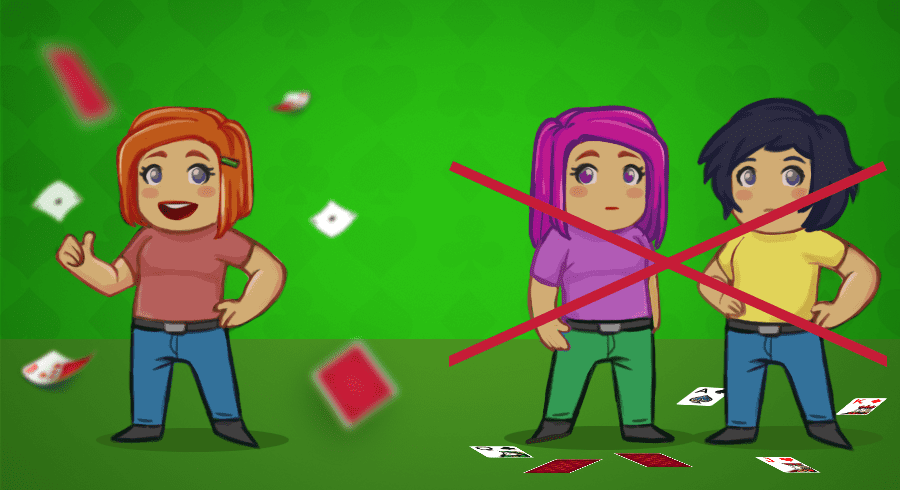 Our online solitaire is easy and fun to play on your own. Try it yourself!

A deck of cards is full of limitless possibilities when it comes to entertaining yourself with games that are both fun and challenging. Add variation to your single-player card games by learning a variety of games that can be played alone.

How to play cards if you’re alone

Sevens is a single-player card game that is similar to a traditional game of dominoes. All you need to play is a standard deck of cards and enough table space to lay out separate rows of cards.
Start by shuffling the deck. You will then flip through the deck laying cards face up in a discard pile until you come across the first seven of the deck. That seven can then be played onto the playing field. You will continue to flip until you find the six or eight in the suit of the first seven played or until you find another seven.
Cards can be played in ascending or descending order by suit after the initial seven are laid. For example, let’s say the seven of hearts is the first card played. The player will then look for the six or eight of hearts or another seven. Let’s say the next playable card to come up is the eight of hearts. The player will then lay that card above the seven. Now, the player can play the six of hearts or the nine of hearts on that pile.
The goal of the game is to lay down all the cards in ascending or descending order in the fewest moves. The fewer times the player must go through the deck to use all of the cards the better. Play multiple rounds to beat your previous record.

Concentration is a memory game that is both fun and a great way to train your brain. All you need to play is a standard deck of cards and a large enough surface to lay all of your cards out in rows face down. The goal of the game is to flip over cards one by one to find two numbers with the same color.
Start by shuffling the cards thoroughly. Then lay down cards one by one face down in rows and columns. The best way to lay the cards out is to put down four rows of 13 cards each. Now that the cards are all face-down and laid out on the table, you will begin the game by flipping over one card of your choice. You will then flip over another card of your choice to find the first card’s match. If both cards are the same number and the same color, remove both from the table of play. If they are not the same color, flip them back face down and try again. The game ends when all pairs are matched and removed from the table.

Poker patience is a single-player card game that uses the rules of poker to create a unique and exciting game. To begin, players should shuffle their standard 52-card deck thoroughly. The player will then lay out 25 cards face up in a five-by-five grid. Once a card is laid, the player should not move it. Once all 25 cards are laid, the player will then count points by the winning poker hands that appear in each of the vertical and horizontal rows of five.
A royal flush is worth 100 points, a straight flush is 75, four of a kind is 50, a full house is 25, a flush is 20, a straight is 15, three of a kind is 10, two pairs is 5, and one pair is 2. The game is played with 25 cards at a time until a player reaches 200 points.

For those who want to play right now here is the decision – Solitaire Social!

Wish is a challenging single-player card game that uses a reduced deck of 32 cards so you will need to remove all of the cards valued 2, 3, 4, 5, and 6.
After those cards are removed, shuffle the deck and deal the cards into eight piles of four cards each. Then turn the top card of each pile face up. Look for pairs of any value regardless of suit. If a pair is present, remove the pair from the piles and flip over the face-down card underneath. The game is over when all cards are cleared from the table, or there are no pairs available to play.

Napoleon at St. Helena is a variation of traditional solitaire that the French leader most likely played during his exile. The game requires two standard card decks to be combined. Shuffle the cards and begin by placing ten rows of four cards each on the table face up. These cards need to overlap so that the bottommost card is the only one accessible. The rest of the cards are placed in the draw pile.
The game is then played like traditional solitaire. The player will draw the first card and attempt to play it. If it cannot be played on a foundation pile it goes to the waste pile underneath the ten piles. The topmost card of the waste pile can be played, but the ones underneath it are unavailable until the topmost card is played. The game is over when the player builds 8 foundation piles going in ascending order from ace to king for each suit of the double deck or until no more legal moves are available.

If you are looking for a single player card game to play online against people from across the globe, Solitaire Social is the perfect place for you. With a variety of game modes, there is something on Solitaire Social for everyone. Play in tournaments to test your skill against other players. Use special game boosters to add another layer of fun to the classic single-player card game. The best online solitaire is happening at Solitaire Social.

Millions of people around the world have chosen our game! Try it too!