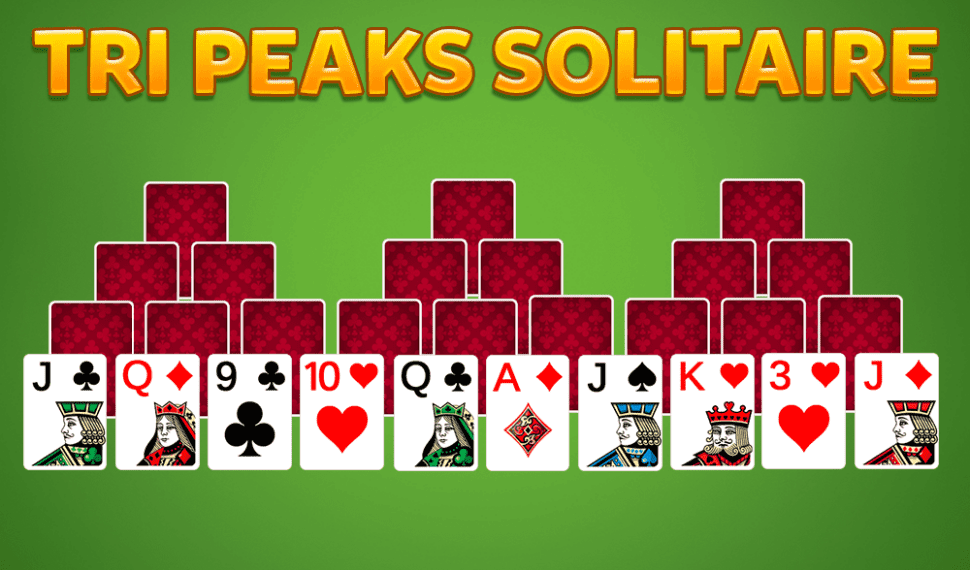 If you are a fan of card games, then you must have heard about Solitaire Tripeaks, or simply Tri Peaks. This is one of the oldest card games out there. It is known by multiple names such as Tri Towers, Three Peaks, and Triple Peaks. Those familiar with solitaire games such as Black Hole quickly get the hang of the game. This solitaire game uses a single deck; you need to clear the three peaks before winning.
The game’s creator is Robert Hogue. He came up with the game in 1989. To ensure the game worked, Robert used a statistical analysis game to see if it was solvable. The results showed that the game is 90% solvable, and you can get an average score of 60. This game was initially shipped in the Windows Entertainment Pack 3. It was also featured in the Microsoft Solitaire Collection.
This was a very successful game, and after that, many people have tried to come up with similar Tripeak Solitaire games! If you are bored of it and need to give your brain healthy exercise, play our free Solitaire Social today!

If you want to try something new, just click here

The rules of Tripeaks are simple, and that’s what makes it even more fun! With simple to understand rules, you can play the game all day long! Here are the rules:

Here are three components of the Tripeaks game:

The setup includes three peaks with 6 unopened cards each. All the bottom cards face upwards while those on the top of the stack face downwards. You will only be able to access the bottom cards once you put the top cards to waste.

There is a pile of cards on the left side of the bottom. It is called the ‘stock’, as you can draw the cards from here when you have to put them on the waste.

You can find a new pile next to the stock, called the ‘waste.’ This pile is empty when the game starts and fills up during the process of the game.

The gameplay of Tri Solitaire starts with a total of 18 cards that are dealt face down. These 18 cards form three pyramids that have six face-down cards each. These stacks are called the pyramids. Then, you have a row of 10 cards facing upwards and others facing down above them. 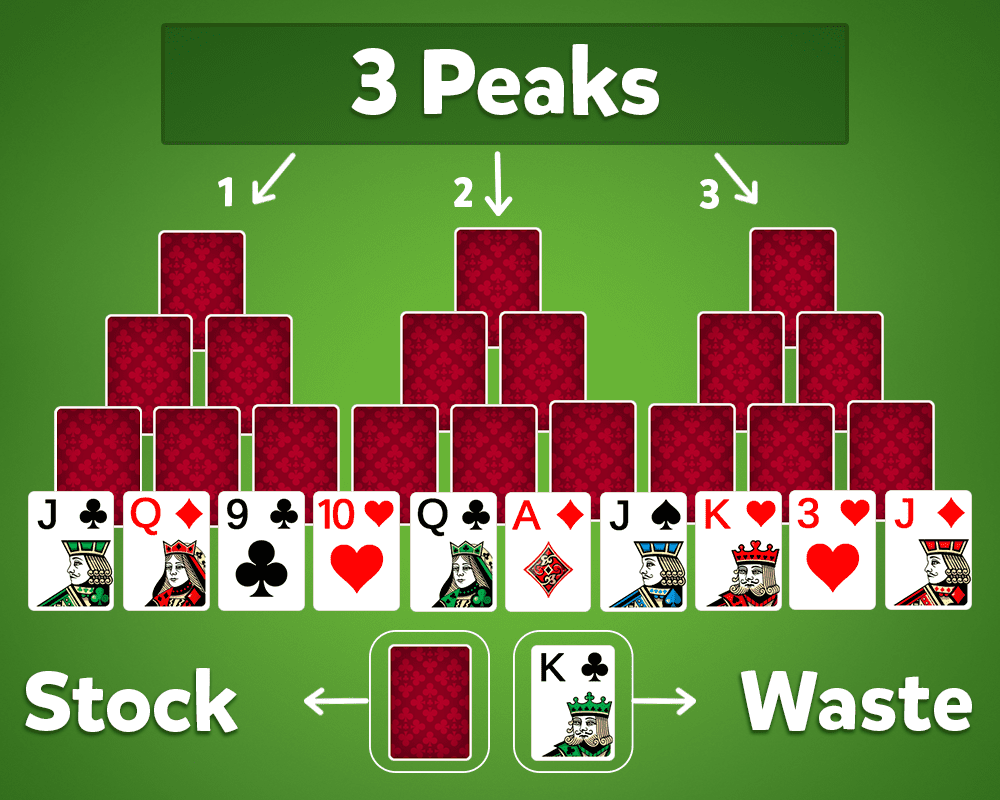 You need to move all the cards from the peaks to the waste in the game. However, you cannot move the closed cards to waste; the cards need to be open. An open card does not have any other cards on it. At the start of the game, you will see the bottom row open, and you can start moving the cards from the peaks.
Once you move a card, you can move the card under it as it is now open. To move the card to waste, the card needs to be one rank higher or lower the last waste card(if you have 3 in the waste you may put 4 or 5 up on it, if you have Ace – 2 and the King will fit). In the beginning, you deal one card from the stock to the waste. After that you can put on it suitable card from the first row. You may come across instances where there are no cards for you to put to waste. In such as case, you can draw a card from the stockpile. It is best to use cards from the stock when necessary because you cannot rest the card then.

Where to Play Free Tripeaks Online?

There are many different options if you want to play Tri peaks Solitaire free online. All these Tripeak Solitaire free games have the same game plan with a few differences in the design. With so many internet sites, you can easily play the game whenever you want to refresh your mind or have fun.
One of the best options to play the game online includes our app – this is our mobile Tripeaks Solitaire game – Golden Prairies – one of the best designs that can keep you engaged for a long time. You may also try other Kosmos games here.

If you are looking for similar Tripeaks Solitaire games, you can try Tripeaks Solitaire Card Farm. This game is very similar to Solitaire Tripeaks and has the intuitive gameplay. If you want to start an engaging game, this is the best choice for you. In this game, you will get the best of both worlds; by playing Solitaire Tripeaks card games effectively, you can build a digital farm and enjoy the game with your friends.
This game is the modern version of Solitaire and has exciting challenges for you to complete to build the farm of your dreams. You can do many things such as raise animals on your farm, grow crops, and more. If you love a good card game, you will surely enjoy this one.
The graphics are very aesthetic and can keep you hooked for hours. You must try it! Here is the link; you can start playing now!
If you are familiar with Pyramid Solitaire and want to take it a level up, then you must give this game a try as both of them are laid out in the same way.
If you are looking for an exciting option, Solitaire Social is the best fit for you!
In Solitaire Social, you experience magical spells that help you unblock cards and swap them, giving you an advantage in the game. You can find all the details of the spells here. Just log on to Solitaire Social today.

The best Solitaire game is waiting for you!