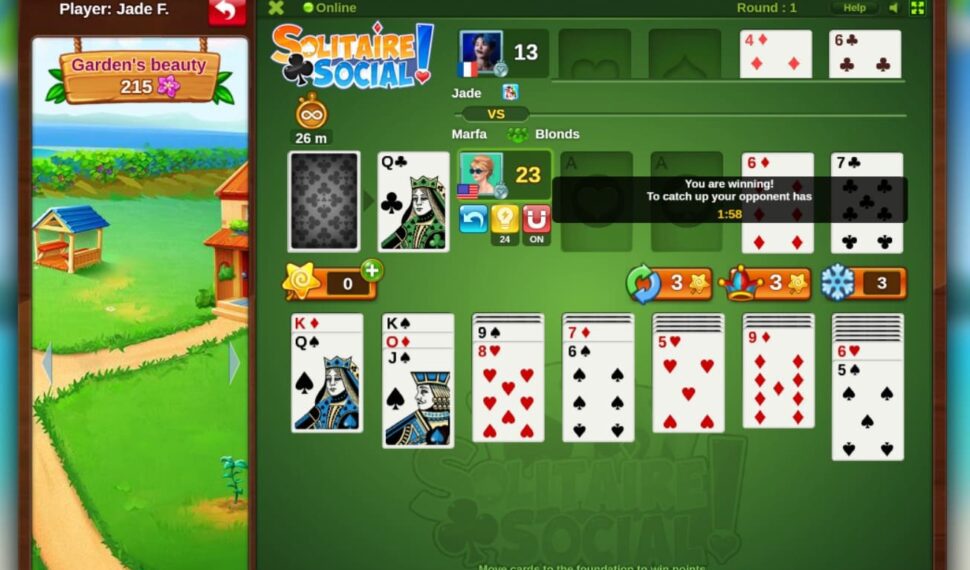 Microsoft Windows made free on line solitaire games more well-known by including them in its game collection. The game has been a part of Windows for many years, and it is still holding strong. Therefore, it was not surprising when the game steadily gained popularity. It is astonishing how players of various ages continue to enjoy this activity. It is a common situation to see grandparents enjoying this game and there are some reasons why Solitaire is so famous among elderly people.
First of all, they can play free solitaire without downloading. It is suited for everybody because it has a range of difficulties. A player only needs to become acquainted with the rules, then he or she can readily hone their gaming talents by enjoying it. People of all ages can play solitaire. Even your granny will succeed in this game. Additionally, when your grandma feels that she is bored with simple levels, she can move to higher complexity in a solitaire free game.
So in this article, we compiled for your grandma a list of free solitaire games to play online.

The majority of people are aware of this solitaire game and play it on their computers. This is a traditional solitaire card game. When people hear “solitaire” they usually picture this type of game in their mind. Its name derives from a game that explorers played during the Canadian gold rush (it took place in the Klondike region). This free online solitaire game occasionally goes by many other titles, for example, Canfield.

In this game, 52 cards are used. The objective is to arrange cards in the special empty spaces, in order of suit. In the foreground, the cards are distributed into seven heaps. Only the top card is displayed, other cards are face down. Finishing a round and placing all the cards on the base is incredibly fulfilling, but beware — also it is quite compulsive! When you understand how the game operates, you will complete a game very quickly, which makes it the perfect option for a casual game and you will play solitaire free without downloading again and again. There are different strategies for how to win this game.

This is one of the most popular free online solitaire games to play now. Its gameplay is entirely placed within the tableau, quickly distinguishing it from Klondike. Spider is a good starting point for beginners, and when some time passes you will certainly advance towards the more challenging and tactical variations. However, each round lasts longer than in a Klondike, even though it is simpler. Nevertheless, it takes a long time to play this free solitaire game without downloads, there is more opportunity for technique and careful performance.

Spider for Microsoft included a ranking system, which allowed participants to use “undo” to find hidden cards and utilize these to guide their decisions, although at a minor cost.

If your granny desires to start playing right now or she doesn’t have enough space on her smartphone or computer, you may advise her to play free online card games without downloading or registration. Your grandma just needs to open the browser and start enjoying it. A great feature of this web application is that there are no ads at all, so nothing will annoy a player. There is also no paid subscription because it is among those free card games online no download no registration. It can also be played via Facebook if your grandma is a fan of social nets.

Another name for this game is Shanghai Solitaire. It is one of the most-played solitaire free download games for android mobile. It can be downloaded on any device because it takes up little space on smartphones. Many good solitaire games are available on Google Play. In addition to the standard features, this application includes a beautiful design and user-friendly interface – this is an advantage because it makes it easy for your grandma to play this game. Generally, it’s a nice opportunity to enjoy free time. The main feature of free solitaire download for android is that your grandmother can play it everywhere and she doesn’t need to take a laptop or cards with her. Such leisure might be described as not only fun but also helpful – it relieves stress and boredom. Playing solitaire improves memory and sharpens the mind.

Your grandmother should try these free solitaire games to find the one she particularly enjoys playing before pursuing further. People who grew up when computer apps and games were not so sophisticated, spectacular, or diverse as they are now will recollect memories of the past times they spent playing solitaire games on their computers.